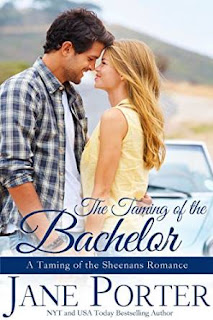 Dillon Sheenan refuses to be tamed…

After three years running the family ranch, sexy thirty-year-old Dillon Sheenan has a one way plane ticket out of Montana. He’s eager to put small town life, with its emphasis on brides, babies, and families, behind him as he’s certainly not interested in being a dad, or even ready to settle down.

Beautiful single mom, Paige Joffe, juggles a lot, between running Main Street Diner and coping with her money-pit of a Victorian on Bramble Lane. She doesn’t have time for anything but taking care of the loves of her life, Addison and Tyler, and working to pay down bills. But one date–and an incredibly hot kiss–with Dillon Sheenan wakes her up and makes her dream again.

Is Dillon about to break the heart of the only woman he’s ever loved?


If you ever lost faith in love, this story will bring it back.

When Dillon Sheenan moved back to Marietta to take care of his sick father and help on the ranch, he gave up everything.  He gave up his life in Austin along with the company that he worked so hard to build.  After weeks of negotiations, his company has finally convinced him to come back.

Paige Joffe moved to Marietta after losing her husband during a mountain climbing accident.  She works hard as the owner of Main Street Diner and raising two kids on her own.  When she lost her husband, it tested her faith.  She wasn’t sure what she believed in anymore.

What started out as simple flirting between Paige and Dillon, while talking at Grey’s Saloon, brings them closer together.  But Dillon insists he doesn’t want a relationship.  He really doesn’t want one with a woman with kids.  Kids are not in his plans.  Women in Marietta tended to want to settle down.  That was not in Dillon’s plans either.  Plus, he’s leaving town in a few days.  Maybe once he was back in Austin he could finally let the silly crush on Paige go.  The night of the bachelor auction, Dillon drove Paige home.  He really wanted to stay.  But he fought the urge.  He didn’t want to hurt her.

When Dillon left for Austin, Paige couldn’t get him out of her mind.  How will she be able to change his mind and make him see they can have a future?

This is another one of those wonderfully written stories that you can’t get out of your head after you finish reading it.