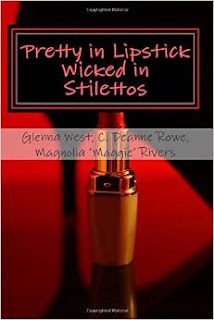 Book Info:
The Stiletto anthologies are three great reads by three great authors - all in one book. Glenna West, C. Deanne Rowe and Magnolia "Maggie" Rivers have once again brought your three fun reads ranging from mild, hot and hotter! Romance at its best with a happy ever after.


Three spicy hot romances that you don't want to miss.

Night Moves By C. Deanne Rowe
Whitney Gaylord has a secret that she doesn't want anyone find out. On weekends she works as a dancer known as Marigold at a gentleman’s club. When her cover is exposed by a coworker, Conner Sullivan, Whitney doesn't know what to do.  She had kept her guard up for so long, Would Conner be the man she finally let it back down to?   Could Whitney’s feelings for Conner possibly lead to a relationship?

Her Heart’s Door By Magnolia “Maggie” Rivers
Dance instructor Alexis Malone has recently moved to a small town where she can hide from her ex, live peacefully and teach classes at her studio.  What she thought was a raccoon in her attic turned out to a 13 year runaway girl.
Sheriff Levi Stanton wants to know more about the new lady in town. Something just doesn't seem right with her and the man she is hanging out with. Could they have something to do with the missing girl he has been searching for.
After a wild night together, Levi discovers the little girl Jessie has been hiding in Alexis' attic. When Alexis and Levi find out the reason why Jessie has been hiding in the attic, they will do anything to protect her and arrest the man who has been abusing her.
Meanwhile, Alexis and Levi find themselves falling into each others arms more frequently.

These stories were all a lot of fun to read.  Each has its own unique topic to keep them interesting.