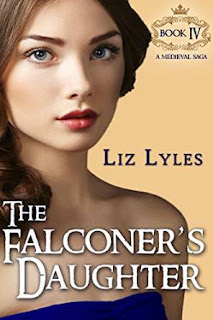 
The conclusion of The Falconer’s Daughter was an intense one.  It brought a mix of emotions.  If you haven’t read the first 4 books, I highly recommend you do so you know what’s going on.  This is an incredible story of one powerful woman and the life she lives.

Pregnant Cordaella and Bran arrive by ship to London.  Bran gets a house set up for Cordaella with a staff and he is off to fight in the war in France again.  He didn’t get far when he found out the baby was born dead.  Bran turns around to go back for Cordaella and helps her through the depression which follows.   Cordaella and Bran had loved each other since they first met.  Maybe now they could finally be together.  But it is not to happen as Bran is called back to duty again.

Cordaella is now running Pedro’s business even though many tell her a woman can’t do business.  She proves them wrong and becomes a great business woman.  She is loving as well and giving.  She travels back to Peveril and finds Elizabeth at the convent and brings her back home.  Phillip willed Peveril to Cordaella’s baby, but now that she doesn’t have one, she feels Elizabeth should own it.  After all it was her home from the start.

When Cordaella finally makes it back to London, will Bran be there waiting for her?  Will she finally have her happily ever after?
Posted by Janine at 5:14 PM