The Falconer's Daughter: Book I by Liz Lyles Review 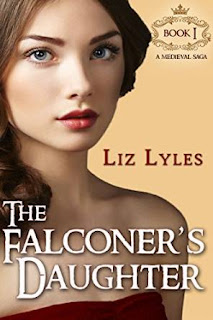 
An intriguing tale of a young girl who loses everything she has known and is forced into a new life.

Cordaella Buchanan didn't know any other life than one of she had. Raised by her father, they didn't have much.  Her father worked hard so they could survive until the day he was murdered.

After her father’s death, Cordaella is forced to leave her Highland home and taken to England to live with an uncle and his family. She didn't know any of them. She was taught many things including how to be a proper lady. She also learns she is the heir to a large fortune. Because of her inheritance, she is prepped for marriage where everyone has something to gain except for Cordaella

When Cordaella overhears conversation between her uncle and a peasant the truth comes out about her father’s death. How will Cordelia handle this?  Revenge is the first thing that comes to mind.

This is a very interesting story. I was hooked right away. I'm ready to read the next book now.
Posted by Janine at 7:17 AM