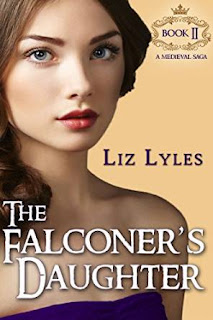 
This addition to The Falconer's Daughter begins with the preparation of King Henry V's arrival at Peveril for the council's meeting.  Everyone must pitch in to make it a successful event.

Sixteen year old Cordaella is admired by a string of suitors even though she is betrothed. Her cousin Phillip still wishes they could be together.  He doesn't want her to marry Duke Fernando.  He believes she will be unhappy in the marriage.  Bran O'Brien is back and they confess their love for each other late one night.  Cordaella fights her feelings for Bran because she knows they can never be together.  John Cardiff also tries for Cordaella's love.

During a jousting tournament one of Cordaella's admirers is killed and another sent away and told he is not allowed to return.

When fall arrives, it is time for Cordaella to go to Spain to be with Duke Fernando.  He is far from what she expected.  But she remains brave in front of him despite the rumors of him killing his former wives.

She goes through the wedding and becomes an obedient wife as she has been taught even though the memories of Bran still haunt her.  She becomes friends with one of her maids but is afraid to share too much with her.  She doesn’t know who she can truly trust.

This is another book that I am curious to see what happens next. Liz Lyles is an incredible story teller.
Posted by Janine at 7:43 AM