Bride on the Run by Catherine Mann & Joanne Rock Review 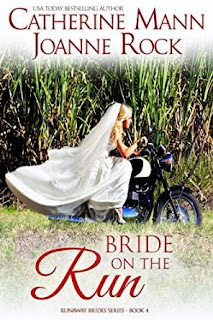 Valerie Dimitri is on the run from her former fiancé who’d only wanted to marry her for her family’s questionable criminal ties. She also has the perfect cover with an assumed name and a thriving call-in advice show, “Sex Talk with Serena”, until one messy call blows up in her face. When she counselled “Anna J” to break up her with her boyfriend, she had no idea that she was telling a local celebrity to dump the hometown hero ballplayer, Boone Sullivan.

Boone has discovered Valerie’s real identity and he’s determined to expose her secrets… and maybe more. What he didn’t expect was to be blindsided by a crazy attraction to the buttoned-up lady with the sultry voice and a hidden past. He had carefully plotted his revenge, but soon all he can think about is how much he’d like to take Valerie as very own his stand-in bride…


Valerie Dimitri's wedding day didn't turn out as she had planned. At the last minute she realized her fiancé was just like her grandfather. Erik only wanted to marry her to get close with her family who are involved in organized crime. So she ran. She hopped on her daddy's motorcycle and got out of town as fast as she could.  She changed her name and became a well known sex talk radio show host Serena Allen.

A year later.
Popular baseball player, Boone Sullivan was all set to get married until his fiancé called Sex Talk with Serena and decided she was making a big mistake. So she called off their engagement the day before their wedding.

Boone is out to find Serena/Valerie.  He wants her to make a public apology for the embarrassment she caused him by broadcasting his breakup during the radio show.  After he gets to know Valerie better, Boone realizes maybe he wasn't meant to marry Annamae after all. Maybe he was meant to be with Valerie instead.

Can a mafia princess and a pro ball player make a relationship work?  This steamy love story is definitely worth reading.