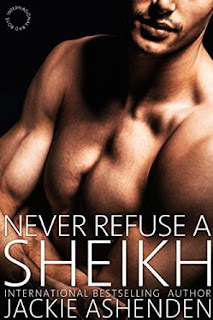 When the sheikh claims a wife, she cannot refuse …

Altair is a man perfectly in control both of himself and the power he wields as regent of Al Harah. Yet in order to retain his stronghold on the country he loves, he must wed a princess wilder than the Bedouin tribe she was raised in. A princess who only has one word for him: no.

Princess Safira knows what freedom means and it isn’t a palace or a crown. Neither does it mean being told what to do by a man with more ice in his veins than blood. Safira is innocent in the ways of men, but the heat in Altair’s gaze calls to a deep, unclaimed part of her soul she cannot deny. Altair seems hellbent on civilizing her, but she’s not so easily tamed. Especially not when she can sense the wildness that lives in him….


Considered dead, along with her parents, Princess Safira bin Yvette al-Kashgari was sent to the desert to be raised where no one could find her. She would be safe until her country needed her.

The time has come fifteen years later. Sheikh Altair ibn Tariq Al-Tahan has come for the princess. The people of Al-Harah were demanding someone with Kashgari blood to rule the country.

Al-Harah couldn’t afford another war. The peace Sheikh Altair forged with a single-minded determination on par with any dictator was tenuous at best and could be broken at any time. Finding Princess Safira was his last option.   Together they could change the entire country.  Would she join him willingly and become his wife or would he have to take her forcibly?

This sexy story was a pleasure to read. I enjoyed the passion between Sheikh Altair and Princess Safira.  I would love to see more of them in future books. I feel there could be so much more to this story.