A Gift from Bob: How a Street Cat Helped One Man Learn the Meaning of Christmas by James Bowen Review 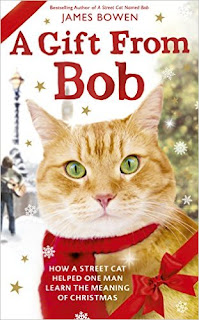 
Bob Fever has swept the globe, with A Street Cat Named Bob vaulting its way to #7 on The New York Times bestseller list in its first week on sale. With rights sold to 27 countries around the globe and a top spot on the British bestseller list for more than a year, this book has been a smashing success around the world. As Street Cat Bob and James spend a cold and challenging December on the streets together, James once more draws strength and inspiration from his extraordinary cat--learning important lessons about the true meaning of Christmas along the way.

From the day James rescued a street cat abandoned in the hallway of his sheltered accommodation, they began a friendship which has transformed both their lives and, through the bestselling books A Street Cat Named Bob and The World According to Bob, touched millions around the world.
In this new story of their journey together, James looks back at the last Christmas they spent scraping a living on the streets and how Bob helped him through one of his toughest times--providing strength, friendship and inspiration but also teaching him important lessons about the true meaning of Christmas along the way.

Readers who fell in love with Dewey and Marley, as well as the hundreds of thousands of fans who read A Street Cat Named Bob and The World According to Bob, will be eager to read the next chapters in the life of James and Bob.


A heartfelt and inspiring story of James Bowen, a London street musician, and his faithful feline companion Bob.

In this book, James looks back on one of the toughest Christmases with Bob and how they survived, yet made a memorable Christmas for themselves and James’ good friend Belle.

The book is filled with delightful stories like when James is desperate for money and his supporters at the Angel Station are there to give him donations and when James gives back to those who help him by handing out Christmas cards.  Gut wrenching stories of an encounter with a drug dealer and how James and Bob managed to get away from him and the heartbreaking tale of Belle’s lost Christmas gift.  These are just a few of the stories in this book.  If you are in need of inspiration this holiday season, or just any time you want a feel good story, I would recommend reading this book.  It left me feeling inspired to do something good for someone.  I also enjoyed the illustrations at the end of each chapter.  I thought that was a special touch.

I given this book to do a review on Book Mama Blog.  Be sure to check out her website for this review and many other great reviews and contests.

Book Mama Blog
Posted by Janine at 6:47 AM