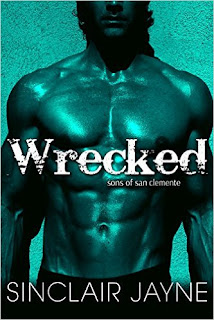 Hollis Remington is slinking home to San Clemente, California. Needing to hide out at her grandmother’s beach cottage to lick the wounds from her latest professional failure, she’s stunned to find her ex lover and professional surf god, Kadan Carson, lounging in the only bed. Naked. Hollis can’t afford a hotel, and no way will she let her family or friends know she’s broke, but Kadan’s refusing to leave. He does, however, agree to share…

Professional surfer Kadan Carson is recuperating after his third ankle and foot surgery, and while it’s highly possible his professional career may be over on the brink of his most lucrative corporate sponsorship deal, he’s determined to fight the inevitable effects of age, gravity, and injury on his body in private. No fans. No nurses. No distractions. Until Hollis shows up, who has always been one hell of a distraction. Six years after she walked out for the last time accusing him of infidelity, she’s still the one woman he hasn’t been able to exorcise from his heart, head or body. And he doesn’t really want to.

There’s no way Hollis can forgive, but she also can’t forget. Kadan was and is her first and only love. Can she help him to heal without losing her heart again?


A great story from the very first page.

When Hollis Remington discovers her ex-boyfriend, Kadan Carson, staying at her grandmother's beach house, she doesn’t know what to think.   Kadan, a pro surfer, has crushed his foot and broke his ankle.  No one knew how bad the injury really was and Kadan planned to keep it that way.  So, he decided not to stay at his own home and opted to staying at Hollis’ grandmother’s house.  Hollis was the only person he could trust not to expose his condition to the public.

Hollis was feeling like she failed in life.  She returned to her grandmother's house to regroup and figure out what to do with her life.  She didn't want anyone to know she was back in town for fear the talk would start again about how she couldn't do anything right.  Finding Kadan in the house threw a loop in her plans.  After seeing Kadan is injured and needs her help, Hollis decides to let him stay and she would help him with what he needed, driving him to appointments, cooking meals for him and whatever else he needed. How will Hollis keep herself from falling in love with Kadan all over again?

“So we have a deal.” The cut of his voice made it sound like a real estate transaction. “You’ll help me during my recovery, and I’ll keep your presence back in town a secret.”

This was a fast paced story that really hooked me.  I liked how the author wrote characters with real life struggles that were easy to relate to.  It made them easy to love.
Posted by Janine at 9:06 AM