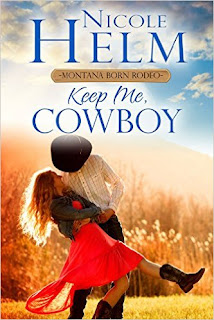 Rodeo cowboy Cole McArthur has spent the last ten years running from Marietta, Montana, from his father’s expectations, and from the only woman he’s ever loved. But now his past is at his front door, begging for his help.

Jess Clark doesn’t want to face the only man who’s ever claimed enough of her heart to break it, but her foster family needs their prodigal son home, and she owes them too much to not make that happen. Seeing Cole for the first time in a decade unlocks the kind of desire she’s only ever felt for him, and never acted on with anyone.

Back in Marietta facing family betrayal and family secrets, heat explodes between them, and feelings buried long ago rise to the surface. But can Jess convince this wandering cowboy that his home is with her?


After a falling out with his family ten years ago, rodeo cowboy Cole McArthur left Marietta and never looked back.  He lived his dream of being a rodeo cowboy.  Cole's father needs him now and Jess Clark is willing swallow her pride and confront Cole to get him to come back home.  Cole broke Jess's heart ten years ago, but she will do what she needs to do in order to reunite father and son again.

Jess grew up moving from one foster home to the next. She worked hard to become a nurse and make something of her life.  The McArthurs gave her a sense of family and she would do anything for them.

Jess lied to get Cole back home.  She told him The Copper Mountain Rodeo wasn't doing as well and If he made an appearance, he might be able to save it.  Cole may not have returned if he knew the real reason Jess wanted him at home was because his father was diagnosed with MS and he was getting worse.

Jess only planned on Cole being home for a weekend.  When he arrives a week early, Jess isn't prepared. She still has strong feelings for him and staying together for a week will be a real test for her.  As they work through their differences, Cole and Jess eventually find themselves in each other's arms.  Now that Jess and Cole have worked through their problems, will Cole be able make amends with his father before it's too late?

This was an emotional book. Jess and Cole were both very stubborn when it came to letting go of the past. Together, they discover how important love and family is, and sometimes it requires some extra effort to work through the differences.