You for Christmas by Madeline Ash Review 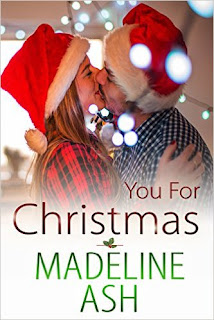 Regan Case wouldn’t know the right side of the tracks if they ran her out of town. She’s lived hard since she ran away at sixteen, but eight years later, an accident has terrified her into pulling her life together. And that means finally going home for Christmas.

Taking her return one step at a time, she ends up on the doorstep of her sister’s best friend, Felix Nickson. The man indebted to her after she jammed ten grand down his trousers in high school and enabled him to escape his own demons. Felix agrees to let her stay, but doesn’t count on the chemistry that burns hot between them.

As they get into the Christmas spirit, he watches Regan’s shadows fade away and discovers that beneath her careless attitude, she is by far the bravest woman he’s ever met. He falls for her, fast and hard, but she fears she doesn’t deserve such a good man. A black sheep cannot change her colors.

Can Felix forgive her past or would asking for his love be one too many miracles this Christmas?


Eight years ago, Regan Case ran away from home.  No one has heard from her since she left or knew if she was alive or dead.  After a horrific accident scares Regan, she decides it finally time to return to Melbourne.

Felix Nickson lived next door to Regan and her sister Stevie in their foster home.  Before Regan left town she gave Felix ten thousand dollars for told him to leave and take Stevie with him.  Felix has done well with his life since then.

Looking for a safe place to stay, Regan turns to Felix and asks to stay with him, but not to let Stevie know she is there.  Regan looks just as tough as she did when she was younger, but Felix can tell something is troubling her.  He works hard to get her to open up more and agree to see her sister again.

Felix and Regan fall for each other hard and fast.   But how will Stevie feel when she finds out her missing sister has hooked up with her best friend?

This fast moving story has a lot of emotional parts in it.  The characters and plot are very interesting.