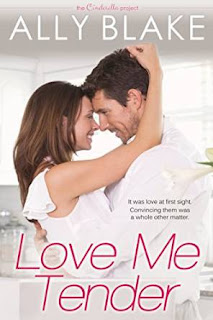 It was love at first sight…

When her Papa loses his job, indomitable Serafina Scott insists it’s her turn to take care of him – meaning landing a well-paying job…and fast. Which is how she ends up working for the Cinderella Project, a high-end matchmaking business, even though she’s certainly no expert on affairs of the heart. Until she meets Murdoch, the gruff builder restoring her extravagant new work place. He’s inscrutable, infuriating, and gorgeous…

Convincing them was a whole other matter.

Murdoch finds Sera confounding…and luminous. But beneath her firecracker exterior, she is dangerously soft-hearted, and the last thing she needs is a broken brute like him.

While Sera does her best to convince Murdoch that they are a match made in heaven, Murdoch makes it his mission to prove her wrong. Will it come down to who’s the most convincing…or who’s most willing to be convinced?


A fun book with quirky characters that leave you craving more

When Serafina Scott takes a job working at a new matchmaking business, she didn't expect her boss would try to set her up with the sexy contractor renovating the house.  She is drawn to Justin Murdoch like she has never been to any other man in her life.

Murdoch has known Hazel for a long time and he would do anything for her.  But he isn't ready to date anyone yet.  When he discovers Hazel's plan of fixing him up with Sera, he flat out refuses even though he can't keep his eyes off the girl.

How far will Hazel go in order to see Sera and Murdoch in a relationship?

This entertaining story was a lot of fun to read.  I liked how forward Sera was when she decided she wanted Murdoch.  He was stubborn and fought the feelings he had for Sera a bit longer than I thought necessary.  But in the end it all made sense.  It was hard won love for them both.
Posted by Janine at 8:13 AM