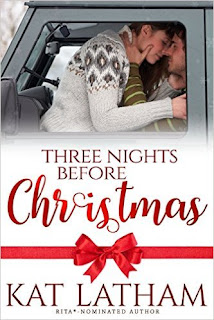 Have yourself a steamy little Christmas…

After three years in prison, freight train engineer Lacey Gallagher doesn’t expect this Christmas to be very merry and bright. At least chopping down trees for her brother’s Christmas tree farm will help her save money to get her life back on track. All her plans derail, though, when her new job puts her in territory patrolled by the man who haunts her dreams—the forest ranger who sent her to prison.

Austin Wilder isn’t thrilled about Lacey working in his forest—but he soon realizes he needs her help. His family is depending on him to restore an old steam train for a spectacular Christmas event, and train expert Lacey is his only hope of finishing in time.

Working together challenges every assumption Lacey and Austin have about each other, and they discover a desire hot enough to melt even the deepest Montana snow. But will the season of second chances be enough to mend the most hardened broken heart?

After spending three years in prison for a crime she was unknowingly committed, freight train engineer, Lacey Gallagher is trying to restart her life.  She ends up in Marietta working with her brother at the Christmas tree farm.

Forest ranger Austin Wilder was the man who helped put Lacey behind bars.  Now that she is out of prison and living in town, he is keeping a close eye on her.  But checking in on Lacey so often, Austin is starting to become attracted to her.

When Austin needs Lacey's help with a holiday project, he starts seeing Lacey for who she really is and not some common criminal.  Will Lacey be able to trust Austin enough to give love a chance?

This well detailed story had me hooked.  I was anxious to find out how the story ends. This book will make you believe in Christmas miracles.
Posted by Janine at 8:48 PM