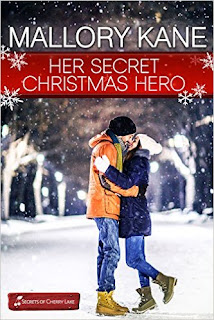 Allie McHale is spending this brutal Christmas Eve snowstorm in a barn in Marietta, Montana when suddenly she hears a horrible crash on the freeway near her ranch. She discovers a handsome lone survivor, a prisoner in handcuffs, and despite her apprehension about harboring a criminal, she rescues him anyway.

Jacob Reeves, on his way to Seattle to testify against his organized crime family, is miraculously saved by the most beautiful woman he’s ever laid eyes on, who has every reason not to trust him, but getting through a freezing Christmas Eve forces them to work together to survive.

During the long night, their chemistry is off the charts and Jake realizes that Allie could be the love of his life. But as soon as the storm is over, he’ll be gone. Is Jake destined to break both of their hearts, or will a Christmas tragedy end in a miracle?

You never know when Mr. Right will show up.

Allie McHale finds this out on Christmas Eve when she hears an accident on the highway during a snow storm.  When she goes to see if anyone needs helps, she finds the driver dead and the passenger desperate to help.  Even though the passenger is in handcuffs, she knows she has to help him or he will die too.

Jacob Reeves was born into a crime family but he refused to live that lifestyle.  He moved away where no one could find him (or so he thought).  He was being transported to testify in court against his father and brother when the deputy lost control of the car and crashed.  He was thankful when Allie found and helped him.

That was a night they would never forget.  Allie's horse CeCe has a difficult time giving birth and she needed help.  Jake knew about horses as he was previously living on a horse farm.  Together they help deliver the foal.  They also share some very intimate moments together.  But the next day Jake is taken away and Allie has to face the fact that she may never see him again.  Will this short lived romance be all Allie and Jake have?   Or, will luck be on their side and they will have a second chance?

I couldn't put this book down.  In a way I was thankful that it was short or I would have been up all night reading.  It is an exciting and very touching story.