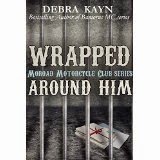 I am a huge fan of Debra Kayn’s Bantorus MC series So when I heard she was writing a new series and it would be totally different from the ones she previously wrote, I was excited. I couldn’t wait to see what kind of twist she would put on the Moroad MC books. I was completely blown away.

Christina Nickelson and Cam Farrell’s story will have you hooked from the first few pages.

Cam is a tough former prison inmate and president of Moroad MC. He has been on his own since he was a kid and never cared about anything except how he would survive. No one cared about him until he met Christina.

Christina had a wonderful family and was a happy child until her parents were murdered. She has lived with the image of finding them dead all these years. She starts writing to prisoner #18794 in hopes of being able to figure out how a criminal mind works so she can get some sort of lead on finding her parent’s murder.

It is sixteen year old Jeremy who brings Christina and Cam together. Christina is Jeremy’s former social worker. All she cares about is that the boy is safe. When she returns after being warned to stay away, Cam kidnaps her holds her locks her up in his house As she gets to know Cam better, she starts falling for him. He’s a broken man who needs someone to love him. He protects her and makes her feel safe.

This is not your average romance. So if you’re looking for something that is all hearts and flowers, this is not for you. This book is raw and gritty, but one incredible well planned out story.
Posted by Janine at 5:39 PM