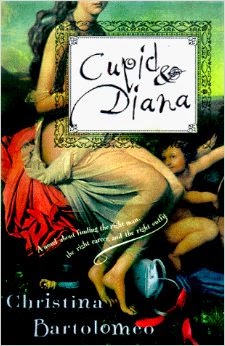 Diana Campanella is the owner of a vintage clothing store in Washington, D.C., teetering on the brink of disaster. She and her blue-blood lawyer fiance still have not set a date for their wedding. And it's becoming more difficult than ever for Diana to keep the peace in her big, unruly Catholic family.
But just when all hope seems lost, Diana meets a rumpled New Yorker named Harry, who casts a new light on her life and its possibilities. Now all she has to do is decide whether Harry's warmth and great sense of humor is a better bet than the familiar security her fiance has to offer.

This wonderful story really makes you feel you personally know the characters.  It is well written and entertaining.


Diana, a vintage clothing store owner, is torn between two men.  Philip is the safe choice and he wants to marry her.  But Diana feels she really doesn’t fit in his world.  Harry is the man she has lots of fun with, but he is married and only in town temporarily.  Though his marriage has no passion, he still feels committed to his wife.  Diana falls in love with him anyway.


I also enjoyed the sisterly bond between Diana and Cynthia.  Even though they do not agree on everything, Diana respects her sister and her advice on how she should run her clothing store.  Together they make it a huge success.


On the day of Cynthia’s wedding, she reveals a secret to Diana that forever changes her world.  Can true love finally be in the cards for Diana?
Posted by Janine at 7:51 PM