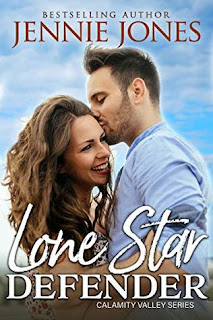 Nine days to build a future…

Pepper Mackillop is no soft touch - but try telling her townspeople that. She’s only been home a week and is facing so many problems she’s numbered them to keep track. Her goal is to help rejuvenate her economically rundown hometown of Reckless in Calamity Valley, Texas, but between the town’s unrealistic expectations and the underhanded developers snooping around, she’s challenged every which way. Then Jack Shepperd comes home.

Prodigal son Jack is forced to return home to his family ranch when his uncle decides to retire. He has nine days to close down the ranch and pay a debt to Pepper’s grandmother. A debt that will keep him all but glued to Pepper’s side. Pep is the most captivating, spirited, headstrong woman he’s ever met. Years ago, she broke his heart. What are the chances of a clean getaway this time around?

I have been anticipating Pepper’s story since I started reading the Calamity Valley series.  The Mackillop women are all soothsayers and they have a curse on them.  Every MacKillop female would forever remain, husbandless, man-less and homeless.  To overcome the curse when they find true love, they have to fight off their great-grandfathers, known as the GGs, the ones who created the curse.

Pepper didn’t think she had any mystical powers like the rest of her family had and she didn’t care about the curse.  She didn’t plan on ever getting married or having a family.  That was until Jack Shepperd turned up in town and turned her world upside down.  The things Pepper didn’t think she wanted in life were soon changing.  She was given a job of rejuvenating Reckless and Jack was put in charge of protecting Pepper.  Working so closely, Pepper and Jack soon realized they were meant to be together.  That’s when the GGs finally showed up.  Pepper and Jack had to work hard to fight off and get rid of the curse so they could get their happily ever after.

This book was an exciting read.  I was drawn in right away and it kept my full attention until the very end.  It was a perfect addition to the series.  Each book can be read as a stand-alone, but I would still recommend reading them in order.  The author does a good job of refreshing the background in each book, but there might be a few small details that get overlooked and can be found by reading in order.