Review: What Happens in the Ruins by Kelsey McKnight 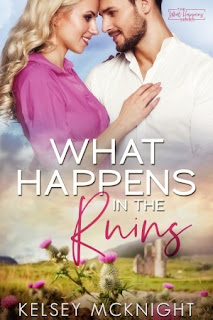 Can she stop her past from ruining her future?

Sorcha Mackinnon isn’t your typical tortured artist. She is also a party girl, a vintage shopper, and the heiress to a whisky fortune. But when inspiration suddenly flies out the window, she’s left with an empty whisky glass and a blank canvas…until a childhood friend waltzes back into her life.

She’s known Danny Gordon since birth, but they lost touch as their careers took them in different directions. He offers to show her the parts of Scotland he swears will spark life back into her brushes. And as they tour the sights on the back of his motorcycle, Sorcha realizes that under the tattoos and smart mouth, Danny may inspire more in her than just a new painting.

But as a good time begins to morph into an ever after, Sorcha is reminded of old wounds that just won’t heal. Danny tries to open her heart, but her self-imposed isolation makes things harder than ever. Now she must decide what to do, because what happens in the ruins doesn’t always stay there.

Two old friends, Sorcha and Danny reunite years after the death of Sorcha’s twin brother Johnny, who was also Danny’s best friend.  What happens next is full blown romance.  But Sorcha doesn’t trust love.  She is afraid of losing someone she loves again.  She is content with just hooking up with Danny while he takes her around the countryside helping her get her artistic inspiration flowing again, so she can paint for her upcoming art show.  When Danny confesses his love for Sorcha, Sorcha pulls away.

My heart broke for Sorcha and Danny immediately when Sorcha decided she didn’t want to see Danny again.  But I enjoyed seeing how they worked their way back to each other.  I also enjoyed catching up with the characters from the previous books in this series.  The author did a fantastic job with creating interesting characters, that I couldn’t get enough of, and scenery that was easy to visualize.  I think I might need a trip to Scotland one day.  Even though this is a standalone story, I would recommend reading the books from the beginning of the series to get to know all the characters as their stories play out.