Review: His Shock Marriage in Greece (Passion in Paradise #3) by Jane Porter 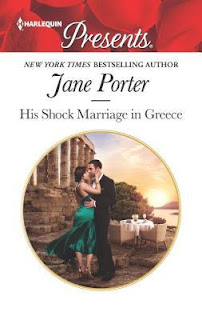 Scarred by his dark past, Damen Alexopoulos does not let emotion dictate anything—especially his choice of wife. So when his convenient society bride is switched at the altar for her innocent younger sister, Kassiani Dukas, Damen is adamant their marriage will remain strictly business. He’s too damaged for anything more. Yet Kassiani’s determination to know him—and the intense passion of their Greek Island honeymoon—could be this ruthless Greek’s undoing!

An arranged marriage between Greek tycoon and a virgin wallflower make for an unforgettable story.

Five years ago, Kassiani Dukas's father made a deal with Damen Alexopoulos, a Greek shipping tycoon.  He could marry his daughter, Elexis, in exchange for a merger between their companies.  But when it came time for the wedding, Elexis had disappeared.  There was no way her father's business could survive without the marriage deal.  So now, Kassiani was being forced to marry Damien in Elexis’s place.

Kassiani was the forgotten Dukas.  Her father didn’t want anything to do with her because she wasn’t pretty like her sister.  He didn’t appreciate her intelligence.  He always said a Greek woman’s place was at home and not working.  Kassiani desperately wanted to be part of the family business but wasn’t allowed.  She was desperate for a way out, a way to leave home.  So, when her father told her to take Elexis’s place and marry Damen, she agreed.  Marrying Damen would be how Kassiani could get away from her controlling father.  She could also claim the trust that her late aunt left for her giving her financial freedom.  Kassiani fell in love with Damen right away, but Damen didn’t like affection and didn’t believe in love.  Kassiani had a lot of work to do if their marriage was going to last.

I could relate to Kassiani's self esteem issues and how she felt she didn't measure up to her siblings, so my heart went out to her. But, she was very smart and she had more to offer than she thought.  I enjoyed seeing her finally win over Damen, even if it did take to the near end of the book to do it.  Damen was another story. He was a bit stubborn and secretive at first, a total alpha male, so seeing him finally soften up was a pleasant surprise. Most of the book took place on a yacht cruising around the Greek islands.  It really had me longing for a vacation there.  I would recommend this book to any armchair travelers, like myself, and those just seeking a good romantic story.  You’ll be swept away.