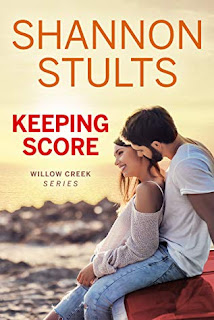 With everything on the line, it's game on

Logan Kase has reveled in being Willow Creek's infamous wild child until one detrimental decision proved it was time for a change. Years later, Logan is back in her small hometown and ready to prove to everyone (especially herself) that she's not that same girl anymore. But the new life she's so carefully constructed starts to tear apart the second she runs into Cole Tucker.

Logan thought she'd put her childhood rival and their adolescent games behind her, but it takes her only one night before she’s forced into one final game, a series of hilariously immature challenges that has the whole town keeping score. A game that, should she lose,

Sweet, romantic, funny and emotional.  This book had everything I wanted from a romance story?

Logan Kase had finally returned to Willow Creek, and she brought her fiancé, Jacob, with her.  It was quite the surprise to everyone in her hometown to see the formally wild child hooked up with a strait-laced, buttoned up shirt, kind of guy.  But it was an even bigger surprise to Cole Tucker who had secretly been in love with Logan since they were kids.  Cole knew the real Logan and the image she was putting on in front of her doctor fiancé was not the Logan he remembered.

When Jacob is called out of town, and Cole and Logan end up at Wade’s Bar drinking, it leads them to a series of crazy challenges that eventually leads them to second thinking the futures they had planned.  Everyone in Willow Creek knew Logan and Cole were meant to be together and this was the push they needed to find their way back to each other.

I really got into this book.  The author really has a way with her words.  Every element that I look for in a romance was in this book and I even got teary in the end.  The characters were so much fun.  They felt real and Willow Creek felt like a place I wanted to live in.  I can’t wait to read more books in this series.