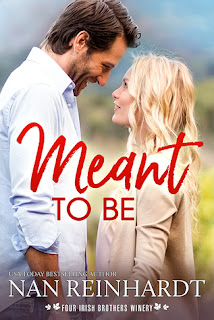 Best friends since grade school, high-powered Chicago attorney, Sean Flaherty, and small-town mayor Megan Mackenzie have always shared a special bond. When Sean is shot by a client’s angry ex, Megan rushes to his side, terrified she’s about to lose her long-time confidant.

Upon his return to River’s Edge to recuperate, Sean discovers that his feelings for his pal have taken an undeniable turn for the romantic. While Megan struggles with an unfamiliar longing for Sean, she worries that he may be mistaking a safe place to land for love.

Can Sean help her realize that they are truly meant to be so much more than friends?

It took years and a tragedy for them to realize what everyone else had been seeing all along.  They were made for each other.

Megan and Sean had been best friends since they were kids.  Their friendship remained as adults even though they live miles apart.  Sean became a lawyer and moved to Chicago and Megan was the mayor of their home town.  After Sean gets shot outside the courthouse trying to protect his client, he returned to River's Edge to recover with his family and do a little work at the family winery.  Spending more time with Megan made him realize how much he missed her and wanted her in his life permanently.  Megan was feeling the pull too, but she feared what might happen if they gave into their feelings and it didn't work out.  She didn't want to lose her best friend.  When Megan and Sean finally decide to give love a shot, they realized they were meant to be together.

I enjoyed how the author told this story.  She had me hooked from the start.  Of course, this is a romance book, but there is so much more too.  I enjoyed catching up with the characters from the previous book and learning more about the Flaherty brothers and the rest of the residents of River's Edge.  I can't wait to read the next book in the series.