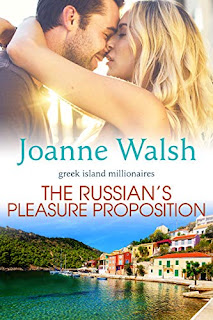 Hannah’s excited to be working for Frankie Kontarinis’s property company in the Greek island resort of Agia Kalamaros. And determined to impress her first client. Even if he’s millionaire music mogul, Sergei Alkaev, who’s well known as the Russian Rake, is a heartless playboy who changes girlfriends as often as his socks.

Tired of dating greedy, fickle women, Sergei’s not looking for another relationship—until Hannah has him thinking again. But her opinion of him is that he’s heartless, so how can he change her mind and persuade her to be his lover? When Hannah lets slip she’s inexperienced, Sergei makes her a proposition: let him teach her about love-making until she’s ready to find a man who will give her the happy-ever-after she deserves…

An enjoyable romance story with a bit of a twist.

This is the second book in the Greek Island Millionaires series and it was just as good as the first.  The story opens with a wedding and Hannah and Sergei sharing an unforgettable kiss.  Four months later, Hannah moved to Greece to work with her friend, Frankie, as a property manager.  Hannah didn’t plan on meeting a man or running into music mogul, Sergei, again. But when Frankie put Hannah in charge of managing Sergei’s house, she had no choice but to see him again.  Though Hannah tried to fight her feelings and the memory of the kiss, she had a hard time with it.  But Hannah knew Sergei was a playboy and she didn’t want anything romantic with him.  She knew she was no match for him, but they could be friends.  Hannah has a medical condition that she let rule her love life.  When Hannah confides in Sergei about her condition, Sergei offers to help her through it.  He just got out of a bad break up and isn’t looking for anything serious.  So, a little temporary thing with no strings attached just might do the trick for them both.  But when emotions get involved, anything can happen.

This was a quick easy read for me.  I enjoyed Hannah and Sergei’s story.  They were both a bit stubborn, but when they finally let go, it worked out perfectly.  It just took some time for them to get there.  The backdrop of Greece made the book visually stimulating as well.  I really liked how the author added a pregnant cat to the story.  It brought out Sergei’s softer side.  I would recommend reading the books in this series in order as there is an ongoing story about a missing brother imbedded throughout the series.