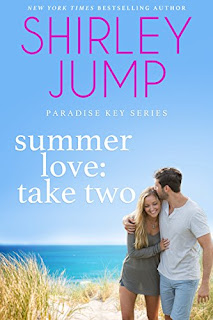 Lauren Webster has always thought the town of Paradise Key could use a little shaking up. A partner in a marketing firm, Lauren decides to turn her trip to Paradise Key into an opportunity to work with the Tourism Bureau and create a splashy media campaign. Lauren isn’t interested in love—she’s all business from the second she arrives... until the summer love she never forgot leads the fight against her cosmopolitan changes, and Lauren begins to question the life she thought she wanted and the life she left behind.

When Carter Malone's father has a heart attack, he runs back home to take care of his family. He revels in the small town life, so when he hears Lauren's plans for commercializing Paradise Key, he steps up as her most vocal opponent. However, he can't forget the summer they shared and everything unspoken between them.

If Lauren falls for Carter, she risks losing everything she's worked for. Will this second chance at love be doomed before it has a chance to rekindle?

Lauren Webster always played by the rules.  She was a good girl, raised from an early age to take over her father’s marketing firm.  But, one summer when she spent time on Paradise Key, she rebelled.  And she rebelled in a bad way.  She even fell in love with Carter Malone.  Lauren and Carter both had different plans for their futures and when summer came to an end, they broke up.  But they never forgot each other.

After Lauren’s good friend, Lily, passes away, she returns to Paradise Key, but she also has another plan.  She wants to try to get Paradise Key’s tourism bureau to agree to a new marketing plan to bring more business to the little island.  Lauren needs to land this account to prove to her father that she is serious about her job after she loses a big account and disappoints her father.

Carter was surprised when he ran into Lauren and learned of her plan for the island.  Everyone knew they needed to make more money to restore parts of the island and increased tourism was the way to do it, but they were afraid of losing their small town atmosphere that the residents have come to love.  Lauren and Carter butt heads about Lauren’s marketing plan, but when they let their guard down for a little fun, the old romantic feelings start to return.  That’s when this book gets really interesting.

This was a fun book to read and easy to visualize.  I loved everything about it.  The author did a fantastic job writing the characters and keeping their story interesting.

My favorite quote:
It was almost laughable how the two of them were trying so hard to keep their distances, to pretend they weren’t interested, that nothing existed between them.