Review: You Send Me by Jeannie Moon 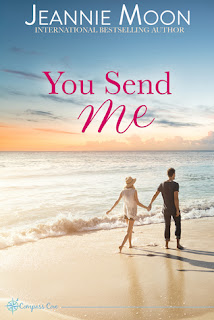 Jordan Velsor didn’t want to need anyone. After dumping her cheating fiancé, caring for her sick dad, and nearly being crushed along with her car during a violent storm, she’s pretty much at her breaking point. If anyone needs some luck, it’s Jordan, but the last thing she wants is gorgeous Nick Rinaldi, her landlord’s grandson, hovering over her while she nurses a bad cold. The wounded Navy doctor seems too good to be true… which means he probably is.

Nick Rinaldi left the Navy broken and adrift, wondering if he would ever practice medicine again. When his grandparents’ tenant is almost killed by a falling tree during a storm, he discovers Jordan is not only in shock, but suffering from pneumonia. Not one to miss an opportunity to play white knight, Nick arrives at her cottage to take care of her during the storm… But the lovely teacher has a a fierce independent streak, and as he learns more about her, he wants to do more than merely help.

Can Jordan and Nick let go or their separate pasts and seize their future together?


Jordan Velsor and Nick Rinaldi couldn’t have been a better match.  They just needed a little push to get there.  Neither of them was looking for a relationship.  Jordan was still heartbroken after finding her fiancé in a compromising position, with another woman, the day before their wedding and dealing with the fact that her father’s cancer was getting worse.  Nick was still recovering from a war injury and wanting to get back to doing what he loves most, being a doctor.  But, when their friendship is mistaken as more, they decide to play along with it.  What could go wrong?

I loved this book from the very beginning.  It was easy to get attached to the characters.  I fell for Nick right off with the way he took care of Jordan when she was sick when he really didn’t know anything about her except that she rented his grandparent’s cottage.  I really liked Nick’s great big family too.  They were fun.  I really liked Jordan too and my heart hurt for her when she walked into her fiance’s office and found him fooling around with his secretary.  Jordan’s friends brought a lot to the story too.  This is the second book in a wonderful series set in a town called Compass Cove on Long Island with a long history of romance.  I can’t wait to read the rest of the books.