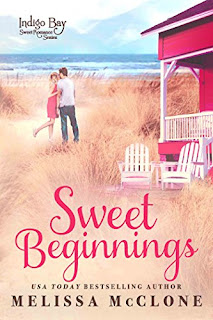 A little hope changes everything...

Artist Hope Ryan dreams of seeing her artwork displayed in top galleries again, but a devastating betrayal left her unable to paint as she once did. Instead, she settles for creating unique items for tourists and wedding couples in her hometown. Although Hope longs for more, she refuses to venture outside her comfort zone, fearing the heartbreak and disappointment of failing again.

Highly paid sportscaster Josh Cooper never overcame his bitterness after an injury on the football field sidelined him for good. Finding his solace in alcohol and women only made matters worse until he finally hit rock bottom. Now, he’s looking for redemption. When he’s asked to fly a wedding gown across the country for one of the victims of his wrongs, he doesn't hesitate.

Arriving in Indigo Bay, Josh finds himself captivated by the artist creating the wedding favors. He knows exactly what he wants—Hope—even though she deserves someone better. Can Josh prove he’s more than a broken has-been? Or will he not only lose Hope but also lose himself?


A nice clean romance between a struggling artist and an alcoholic football commentator who are brought together by an impending wedding.

Josh Cooper, a well-known sports commentator, was on leave of absence while he went through rehab for his drinking problem, when he offered to fly his friend Jenny’s wedding dress and some other things to South Carolina for her wedding.  Little did Josh, know this trip would change his life.  In the past, he was known for dating lots of women and leaving them heartbroken.  When he met Hope Ryan, who works at Indigo Bay Cottages Resort, he knew she was the one he wanted to spend his life with.  But he had one thing standing in his way, his recovery wasn’t done.  He needed to go through 12 months of not drinking or dating.

Hope left her life and art career behind in New York City when her marriage failed.  Now she lives with her brother and spends her time painting souvenirs and wedding favors.  She had no desire to touch the canvases again.  She only knew Josh a few days when his time in Indigo Bay came to an end and he had to return to Washington. Hope knew she had to let Josh go even though she had already fallen in love with him.  But from her sadness, a miracle took place, she started painting again.  And this painting just might have the ability to bring Hope and Josh back together again.

This book touched me in so many ways.  For starters, I always like a starting over story and both characters are starting their lives over.  But I have never read a book that had a hero who was an alcoholic.  It really amped this story up a notch for me and made it very believable.  Even though this is part of a series, you can totally read it as a stand-alone.  The other characters mentioned don’t take away from this story at all and just add more depth to it.
Posted by Janine at 5:00 AM