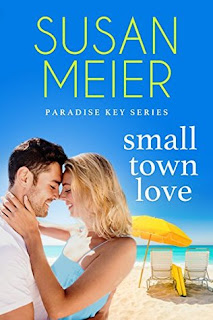 After her estranged father is indicted for insider trading, wealthy heiress and morning talk show personality, Evelyn Barclay, returns to Paradise Key. She takes a job with a friend, only to discover she's now in charge of Paradise Key's sexy mayor, Paxton James.

Pax wants nothing to do with the video Evie needs to produce for the town's new website. But he can't deny that every time he's around her, sparks fly. Not only is she beautiful, but when Evie steps up to help his daughter, he sees another side of her.

Just as Pax and Evie grow closer, her dad's appearance in Paradise Key threatens to send her into hiding again and ruin their budding relationship.

The last installment of the Paradise Keys series, about four friends who come together for another friend’s funeral, is Evie’s story.  Evie is a talk show host who is on leave from her job after her father was arrested for insider trading.  She is hiding out from the press and helping her friend Lauren with Paradise Key’s website to pass time.  Her main job is filming the town’s mayor, Paxton James, while he talks about the weekly events on the island.  Evie instantly feels a pull towards Pax but she fights it.  She isn’t looking for a man and none of her relationships ever work out.

Pax lost his wife five years ago and is raising their daughter on his own, but he doesn’t know the first thing about raising a pre-teen girl.  That’s where Evie becomes handy.  She helps Sam with things like makeup and clothes and gives her someone to talk to.  Watching Sam and Evie’s friendship grow makes Pax to want more than just friendship with Evie.  They eventually give into to their attraction and start seeing each other.

There is also another twist to this story.  Evie’s estranged father has arrived in Paradise Key to lay low until his court date.  But Finn has another reason for being there as well.  When Pax tries to bring Evie and Finn together to talk through their problems, Evie flips out.  Will Evie and Pax’s new relationship be able to stand up to Pax’s interference in Evie’s life?

This book was the perfect ending to this series.  It was like several stories rolled into one.  I liked how Evie and Pax had more in common than they realized.  I also liked Sam.  She totally stole some of the scenes and kept things fresh.  I thought it was a little quick how Evie and Finn made up, but it made a sweet ending to their drama and helped wrap up the story.