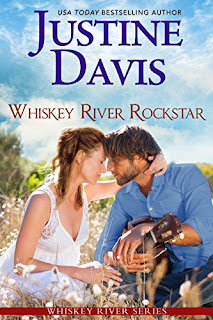 Zee Mahan had always known the boy she loved would leave one day–Whiskey River was too small to hold the talent and charisma of Jamie Templeton forever. She just didn't realize that when he left, it would break her hometown heart.

Jamie had never lied to Zee about his plans, and when he'd left for the bright lights—and made it big—he'd thought she understood. She'd loved him and his music and had encouraged him to chase his dream. Sure, he could have gone home for a visit, but when his band caught fire, he was afraid to interrupt their momentum.

When the crazy world he was living in turned on him, Jamie walked away---back to the only place he could think of to go....home. But was it too late to find forgiveness and rekindle the fire with the only woman he’d ever loved?

An emotional roller coaster of a story.

Jamie Templeton was Whisky River’s very own celebrity, a local boy who turned into one of the country’s biggest rock stars.  After the death on one of his band mates, he decided he wanted to return home to lay low for a while.  He knew his old friends would be there to welcome him with open arms.  But there was one person that he knew might not be as open as the rest, his old girlfriend, Zee Mahon.  He knew how upset she was when he left town to follow his dreams seven years ago.

Zee was still in love with Jamie even though he broke her heart all those years ago.  The thought of having him back in town was unsettling, but she would still be there for him even if it still hurt.  They had been through so much in the past.  Helping him now was the least she could do.

Working together fixing up Jamie’s aunt’s house brought back so many memories for them both.  Those memories were so strong that they ended up finding themselves wanting to pick up where they left off.  But Jamie has been keeping a secret that he hasn’t told anyone.  Will it destroy what they have built once again when he lets it come out?

This was a book that I couldn’t wait to read and it didn’t disappoint.  I could just feel the passion through the author’s words.  I loved both characters.  They were flawed and felt real.  The emotional story made me happy and sad over and over again.  It was a great read all the way to the end.  I also enjoyed catching up with characters from the previous Whisky River books.