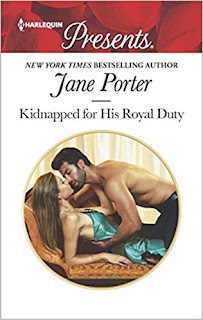 He needs a substitute bride…

And she will be his queen!

When desert prince Dal’s convenient bride is stolen, he must find a replacement—immediately. Suddenly shy secretary Poppy is kidnapped by her merciless boss and whisked away to his kingdom. She’s shocked to find herself willingly surrendering to his expert seduction! But when it becomes clear that Dal has more than pleasure in mind, will Poppy be persuaded to accept his royal proposal?


Poppy Marr was secretly in love with her boss, Randall "Dal" Grant even though he was engaged to her best friend, Sophie.  Poppy knew neither of them would be happy with a marriage that was arranged by their parents, so she intervened even though she knew it wasn't the right thing to do.

Dal, the Sixth Earl of Langston made a promise to his father that he would marry before his thirty fifth birthday in order to keep his title and estates.  When Sophie ran off on their wedding day with another man, he needed a wife quick, so he decided Poppy would be his next choice.  He knew she would be a perfect wife and mother to his heirs.  He just needed to convince her of it.  So, he whisks her away to Mehkar where he could seduce her and convince her to marry him.

This book really took me away.  With the vivid descriptions, the story was easy to visualize.  I could easily picture the scenery, the home and the colorful wardrobe that Poppy would wear.  Both characters seemed a bit stubborn and set in their ways, so it was fun to watch them finally learn to love, trust and put each other first.  I especially liked the part where Dal tells Poppy he not only an Earl, but a prince too and would someday be the king of Mehkar.  Could you imagine?  This is Harlequin romance at its best.
Posted by Janine at 11:42 AM