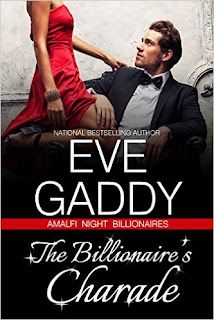 Summer St. Croix hates weddings. But when she meets hot-as-sin Luke Vanetti at her oldest friend’s ceremony, he promises to give her a reason to like them.

It’s all sexy fun and games until Summer realizes that Luke is none other than her new boss. Summer refuses to continue to have a fling with her superior, even though the passion between them still runs wildfire hot. But the billionaire private investigator doesn’t see the problem, especially since he knows that one night with Summer won’t be enough.

When Luke’s cousin sends an SOS asking for help in stopping a ring of jewel thieves from robbing his luxury hotel on the Amalfi Coast, Luke agrees. And Summer’s first assignment will be posing as his very sexy, rich, and bejeweled fiancée at the Hotel dei Fiori Isola del Sole.

Playing the happy couple is hard enough during the day, but the nights… will those romantic Amalfi nights turn the charade into more than just a job for both Summer and Luke… for good?


It's a small world.

While out of town for a wedding, the man Summer St. Croix has a one night stand with turns out to be her new boss.  She finds out when she shows up for her first day at Longhorn Investigations.  This isn't good.  Summer doesn't believe in sleeping with someone she works for.

Luke Vanetti's partner Earl hired the new investigator, so Luke had no idea it would be Summer.  It was a surprise when he saw her in the office the morning Summer showed up for work.  Will they be able to work together without giving into temptation?

Summer and Luke’s first job together is to pose as an engaged couple at Hotel dei Fiori on Isola del Sole in Italy for a big wedding that a lot of wealthy guests will be attending.  Jewel thieves have been hitting luxury hotels across Europe and the owners fear they might be next.

This was one sexy, nail biting and exciting story and a perfect ending to the series.  The writing in this book was incredible.  The characters and the interactions between them felt so real.  I loved the setting and plot.  All around, it’s a great book.
Posted by Janine at 5:55 PM