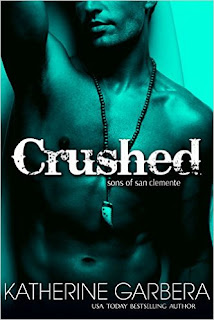 Heath “Con” Connelly is back in San Clemente after three stints in the Middle East with the Navy SEALS. Despite the fact that he’s known to his “brothers” at Preach’s Place for being better with his hands and dangerous when angered, he’s trying to turn over a new leaf. And that’s going…well, not great when he bumps into Mia Santos and notices someone has been beating up the beauty who was always the woman he could never have.

Mia Santos, daughter of one of the most dangerous drug lords, finds herself in the cross-hairs of a turf war. Knowing she put herself there by making bad decisions when deep in a tequila bottle has sharpened her resolve to keep anyone—especially Con—from getting involved in the bloody and dangerous world that is her own. But Con’s not walking away and danger is like a second skin to him. He intends to protect his “family” and claim Mia, unless he gets crushed beneath the dual instincts of lust and rage…

I had a hard time putting this book down.  It was one intense scene after the next.  It's a love story and a story about fighting for what is yours.

Former juvenile delinquent turned Navy SEAL, Heath "Con" Connelly is finished with the Navy and back in San Clemente.  He is living over Preacher's bar, surfing during the day and bartending when he is needed at night.  Preacher is a former preacher who has helped many troubled kids in the past and got them on the right track in life.  He is loved and respected by everyone.

One day after surfing, Con runs into Mia Santos, a beautiful girl he knew from school, on the beach.  Mia has bruises on her body and a black eye.  Con is very upset about this and wants to take care of whoever did it to her.  Little did Con know, trouble was to soon follow and Preach's bar is attacked.

Mia has worked hard to get away from her past and being known as a drug kingpin's daughter.  She wants revenge on the drug dealer who is after her and trying to take over her father's old turf.  Con insists on taking matters into his own hands after the attack at Preacher's bar.  How far will Con go to protect his woman and the people he considers family?

This very sexy story has a well scripted plot and characters you'll find yourself cheering on as you turn each page.  With very detailed sex scenes, intense fight scenes and an emotional ending, be prepared for a wide range of emotions while reading this one.