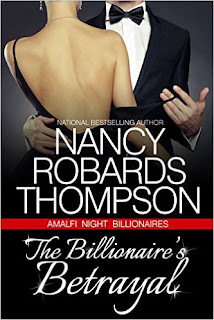 As heir of Dei Fiori Enterprises, Matteo De Luca‘s single focus after his father’s untimely death is rebuilding his family legacy and hotel empire. After two years, he’s close to achieving his goal, but there’s one person standing in his way… A sexy distraction he’d never anticipated.

Two years after her beloved husband’s death, Helena Von Lienz knows it’s finally time to let go. With her share of a hotel business, Helena heads to the Amalfi Coast in search of closure. What she doesn’t anticipate to discover during those hot Amalfi nights are some unexpected truths about her late hubby, and a strong sensual shared desire with Matteo, the sexy and ambitious CEO of Dei Fiori…

Will mixing business with pleasure be the end, or just the beginning, for Matteo and Helena?


What was supposed to be just a business trip turns into much more.

Two years after Baroness Helena “Lena” Von Lienz’s husband Anton dies in a car crash, she returns to Italy to open an art gallery in Venice.  An unexpected guest shows up at the gallery, Matteo De Luca, who also lost his father in the car crash.  Lena knows Matteo is only there to convince her to give him the dei Fiori Hotel shares that Lena’s husband left her after he died.  Lena refuses to give in.

Matteo has worked hard reconstructing dei Fiori Enterprises after his father nearly tore apart the family legacy.  He was in Venice to secure a property for a new hotel when he decided to go to the gallery opening to see Lena.

Lena still has many questions about the night Anton died.  Who were the two women in the car that night and why were they there.  She seeks these answers while she is in Italy too.  Can Matteo help Lena find the answers she seeks?

The love affair between Lena and Matteo was very intense.  But is it strong enough to keep them together?  Or, will it tear them apart when Lena starts thinking it was just a seduction to get the hotel shares back?

I enjoyed this story a lot.  I liked the connection between Lena and Matteo and enjoyed the secondary stories as well.  I look forward to the next book in the series.  There is also a jewel theft plot that I am anxious to learn more about.