A Royal Temptation (Dynasties: The Montoros) by Charlene Sands Review 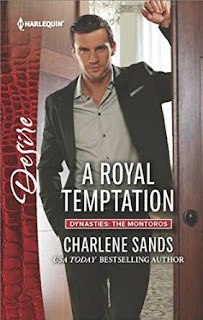 Secrets, lies and forbidden love… USA TODAY bestselling author Charlene Sands brings you the most shocking royal romance yet!
Juan Carlos Salazar II never thought he'd become King of Alma. But when an explosive family secret leaves him next in line for the throne, he's ready.
Until he catches a glimpse of Princess Portia Lindstrom at the coronation. Because it's love at first sight with this mysterious woman. But Portia's secrets test the power of his devotion and Juan Carlos is tempted to throw duty out the window. Sorely tempted.
Soon he must choose between commitment to country and family…or his own heart.

Be sure to read the other sizzling and scandalous stories in the Dynasties: The Montoros series, only from Harlequin® Desire!
MINDING HER BOSS'S BUSINESS by USA TODAY bestseller Janice Maynard
CARRYING A KING'S CHILD by USA TODAY Katherine Garbera
SEDUCED BY THE SPARE HEIR by Andrea Laurence
THE PRINCESS AND THE PLAYER by Kat Cantrell
MAID FOR A MAGNATE by Jules Bennett

Alma's new king, Juan Carlos Salazar II knew hard work would get him ahead in life, but he never knew his true destiny was to be a king.  He would be honoring his aunt Isabella's wishes by restoring the monarchy.  During his coronation, Juan Carlos sees a beautiful lady who winks at him as he passes her. He has to meet her.

Princess Portia Lindstrom of Samforstand was attracted to Juan Carlos but she knew better than to get involved with another high profile man after her last relationship ended badly.  A king was definitely out of the question.  Still, she couldn't stop thinking about him.

When Juan Carlos finds out Portia is an art advisor, he asks for her help finding the artwork that his ancestors had hidden before the war.  That's when their attraction grew stronger and they soon find themselves in love

During wedding planning Portia discovers a secret about her past which could destroy everything between her and Juan Carlos.  Will they be able to work through this new discovery?

I really enjoyed this story. There were many surprises in it and my heart broke for Portia when she found out the truth about her past.   I couldn’t have asked for a better ending.