Some Girls Do (Outback Heat Book 1) by Amy Andrews 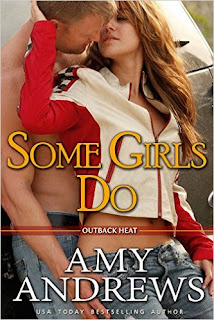 Fashion student Lacey Weston is desperate to leave the city and go home to Jumbuck Springs. Her three older brothers are adamant she’s not. They made a death bed promise to their mother that Lacey would stay the distance at design school and Ethan, the oldest, takes this responsibility very seriously. But Lacey is deeply homesick and determined not to be dissuaded again. She’s also impulsive enough to try anything - even faking a pregnancy.

Ex-cop turned mechanic, Cooper Grainger - one of Ethan’s oldest friends - agrees to watch out for Lacey in the city even though he has a history with her he’d rather forget. How hard could it be, right? But a couple of years later, Coop is over pulling Lacey out of scrapes and cleaning up her messes as she tries to outrun her grief and sense of dislocation. He takes her back to Jumbuck Springs so she can persuade her brothers to let her come home. But things don’t go according to plan. Before Coop knows it Lacey’s pregnant and he’s putting his hand up as the fake baby daddy, filling in for the town mechanic and moving in with her at the local pub.

Lacey is thrilled to have won a reprieve but nothing about the situation sits well with Coop. Least of all having sweet little Lacey Weston as his new roomie…


When a lie gets blown out of proportion, could anything good possibly come out of it?

Lacey Weston had her reasons for wanting to leave Brisbane where she was attending design school and go back home to Jumbuck Springs.  But when she got home, her brothers wanted her to turn around and go right back.

Cooper Grainger used to be Lacey's bother Ethan's partner and he was asked to keep an eye on Lacey while she was away from home and in school.  She might need someone's help and her brothers wouldn't be there for her.  When Lacey comes to him the night after she breaks up with her boyfriend and says she wants to go home, Coop takes her.

Coop didn't plan on getting caught up in the middle of a family mess, but when he saw them gang up on Lacey, he had to step in.  Lacey had lied about being pregnant so her brothers would let her stay home. When they demanded to know who the father was, Coop said it was him to put an end to the discussion and so they would leave Lacey alone.

Lacey quickly becomes popular in her home town after she reconstructs a damaged wedding gown for a friend and the story makes it in a magazine.  When dream job is presented to Lacey, she can't say no, even if it means leaving her home town and Coop behind and moving to Melbourne.  She has to tell her brothers the truth about not being pregnant so she can take on this new job.  But what will happen to the relationship Lacey and Coop have started during the time they have been living together?

Sometimes you have to let go of who you love so they can be all they are meant to be.

This steamy story is one not to be missed.  Lacey and Coop were meant to be together even though Coop was a lot older than Lacey.  The passion they shared was intense. I can't wait to read the next books in this series.
Posted by Janine at 5:35 PM