Review: The Bronc Rider Takes a Fall (The Tremaynes of Texas, #3) by Debra Holt 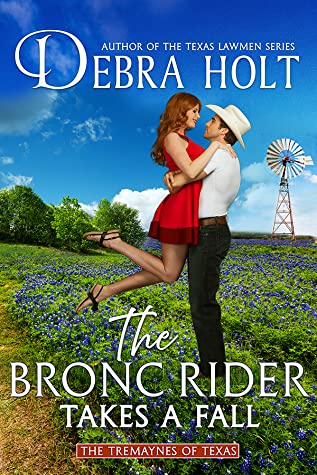 He’s about to take the toughest ride of his life. Will it end in the hardest fall?

Trey Tremayne, world champion bronc rider, is on track to win another championship title when an injury sidelines him. Healing privately at a friend’s cabin and determined to qualify for the finals, Trey is pleased when a beautiful woman literally falls into his arms at the local general store. Maybe a little flirtation will distract him from his troubles, but Laurie is anything but short-term or casual, and Trey immediately realizes he’s out of his depth.

School teacher and single mom Laurie Wilkes has her feet planted firmly on the ground. She will not be swayed by a handsome, sexy bull rider who has given her son a serious case of hero worship and makes her feel fully alive for the first time in years. He’s temporary and definitely not a man to take seriously—but her feelings aren’t casual.

She isn’t his type, and he's certainly not hers. So why do they feel like a perfect match?

This cowboy will do anything to win the girl.

Champion bronc rider, Trey Tremayne has a reputation with the women.  But when he is reacquainted with an old schoolmate, Laurie Wilkes, he starts falling for her.  The only problem is Laurie is overprotective of her heart and her son.  There is no way she will get involved with a “Rodeo Romeo”, even if her heart is starting to have a mind of its own.

This book is a great addition to the Tremaynes of Texas series.   I enjoyed seeing how Trey tried to convince Laurie that even though he had a reputation, he wasn’t like that anymore.  When Laurie finally fell, she fell hard.  But not everything is hearts and flowers.  There were some major bumps along the way in their relationship and in Laurie’s life.