Review: She Gets What She Wants (A Fearless Fairytale #1) by Denise N. Wheatley 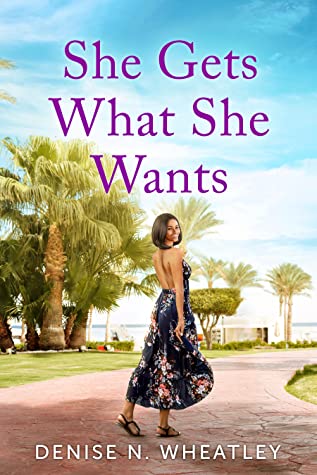 The first rule of conquering Hollywood? Get there.

Newspaper columnist Devon Jacobs is hiding more secrets than just the chocolate bars and half-finished screenplays stuffed in her desk. Kind-hearted and insecure, she dreams of escaping her stifling hometown of Berman, Indiana and moving to Hollywood to write for television. When she drunkenly confesses her feelings to her best friend, Jason, his painful snub finally spurs Devon to action. She quits her job, packs up and flies to Los Angeles to begin the rest of her life.

Devon's newfound drive lands her a production assistant role on a hit television sitcom. As she transforms into a confident and talented professional, she gains the attention of the show’s handsome and charming leading man, Ryan Roberts. But just as Devon’s star is in full ascent, Jason resurfaces. Used to being an extra in the background instead of the lead, Devon must decide whether her long-standing feelings for Jason are worth a second risk, or if she should pursue her developing attraction and friendship with Ryan.

From disaster to happily ever after.

The title of this book couldn’t have been more perfect.  Devon Jacobs does get what she wants, but it wasn’t an easy road for her.  She was stuck at a stressful job and in love with Jason, who didn’t share the same feelings for her.   So, when Devon’s friend, Gabby, calls from Hollywood and tells her there is an opening on the tv show she works at, Devon can’t say no.  Her dream is to be a screenwriter and this could be her big break.  Devon’s new life and job are going good and she is crushing on Ryan Roberts, the star of the show.  But Devon’s fears hold her back when Ryan confesses his feeling for her after Jason starts showing interest in her.  Now it’s up to Devon to be strong and ditch Jason, which seems to be a challenge as he is clingy, and win Ryan back.

This book was the perfect escape.  I couldn’t get enough of it.  It has just the right balance of love and drama.  I can’t wait to read the next book in the series.