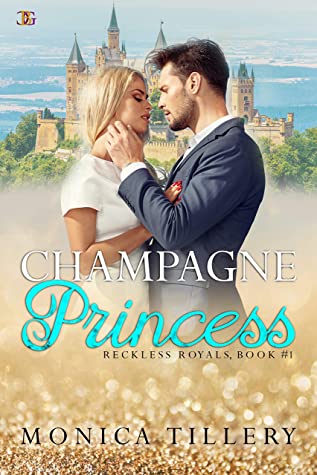 Princess Jordanna earned her reputation as Evanosia’s notorious “Champagne Princess” by spending more time in night clubs than at the palace. She’d love to have a position befitting her title, where she could do some good for her country, but her family has pushed her to the sidelines all her life.

When her parents arrange a strategic marriage between her and the crown prince of Saldinia, she hates the idea of marrying a stranger but wants nothing more than to finally have the chance to show everyone that she loves her country. Prince Liam of Saldinia isn’t thrilled with the prospect of marrying the wild “Champagne Princess,” and getting her to agree is no easy feat. It’s not easy for the serious, determined crown prince to get along with the resentful party girl princess, but duty calls.

Making an arranged engagement look like a love match isn’t easy, but as they navigate royal life together, it becomes harder to tell what’s real and what’s fake. When tensions threaten to tear them apart, will Liam’s love be enough for the “Champagne Princess,” or will things fall flat?

Princess Jordanna of Evanosia is known as the Champagne Princess because of her partying ways.  But there is a reason why she is always seen out at the clubs drinking and dancing the night away.  She is bored without any royal responsibilities.  It becomes obvious what Jordanna’s parents think of her when they arrange a marriage between her and Prince Liam of Saldinia.  She is just being used as a pawn to benefit of both of their countries.  Jordanna decides to make the best of it.  Maybe a new start in a different country would be good for her.  Plus becoming queen one day isn’t a bad gig either.  What Jordanna never expected was for her and Liam to actually fall in love.

I couldn’t put this book down.  I was hooked right from the start.  Escaping into the world of royalty, even with the downside of it, made it a fun book to read.  I could easily see this book as a tv movie.  This book is the first in a new series and I can’t wait to read the following stories.