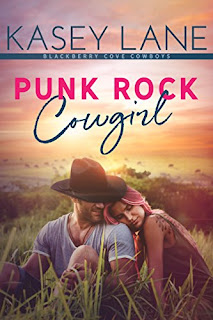 When Kendall Kelly's career as the free spirited punk country crossover queen ends in a fiery ball of doom and humiliation, she has no place to go but back to her hometown Blackberry Cove, California, where she abandoned her secret husband years ago without so much as a note. She’s hoping to pick up the pieces of her shattered life and finally cut the last tie to the only man she ever loved.

As part owner of Kelly Family Farms, Damian Sloan has spent the last few years rebuilding the floundering business into a growing organic farm. He thought he'd moved on from his broken heart, but when Kendall barges back into his life—broken but beautiful as ever---he soon realizes he hasn’t forgotten. Or forgiven. Kendall threatens everything he’s built, but he can’t quite turn her away.

Damian and Kendall must put aside their differences for the success of the farm they both depend on. Maybe, in the process, they can rebuild what they tragically lost.

My Review:
Kendall Kelly, also known as the punk rock cowgirl, was burned out.  She was tired of touring and always being told what to do.  Plus her manager embezzled the advance her record label gave her and now they wanted their money back.  She was back in Blackberry Cove, the town she grew up in and couldn't wait to leave, for her grandmother's funeral.

Kendall planned to stay for the funeral and will reading and be gone as quick as she got there.  But there are a couple glitches in her plan.  She still married to Damian Sloane, even though she walked away from him four years to start her music career.  Kendall's grandmother left Kelly Farms to both of them.  Now, Damian wants Kendall to stay and pick up where they left off and Kendall is starting to enjoy being with him and life on the farm.   But when Kendall gets a call from her record label and they want to meet with her in Los Angeles, Damian doesn’t take it too well.  Will leaving Damian this time be their final goodbye?

I always enjoy a good second chance story and this one grabbed me from the start.  I liked the characters and enjoyed seeing how their story played out.  I look forward to reading the rest of the books in this series.