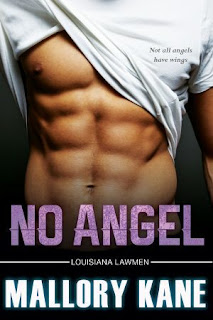 Alexandra Tyler is on the run. She married her college sweetheart, but soon discovered a dark side to him that she’d never seen before. Hoping to find refuge and start a new life, she moves to New Orleans. But bad luck follows and she finds herself barely escaping an abduction. Before she knows it, she’s entangled in the search for a serial killer.

FBI Special Agent Danny DeLuca is on the trail of an infamous serial killer. There have been nine victims in nine months, one during each New Moon. But the tenth victim, Alexandra Tyler, escapes, giving Danny the first break he’s had in the case. His job is to protect her and catch the killer, but as danger closes in, Danny must guard his heart in order to keep her safe.

While the killer continues to commit the almost perfect crime, Danny and Allie are forced to work together, while also resisting the other’s charms. If they give in to their escalating attraction, it could be the death of both of them.

Alexandra Tyler moved to New Orleans two years ago to escape her abusive ex-husband.  Since then everything in her life was going good.  Then she started getting messages from her ex.  He had finally found her.  But that was the least of Allie’s worries.  She recently escaped an attempting kidnapping and when she finds out it wasn’t her ex who arranged it, but possibly a serial killer, it shakes her to the core.  But Allie puts on her brave face and doesn’t let anyone see how worried she really is.

FBI Special Agent Daniel DeLuca was on the case of the New Moon Killer which led him to New Orleans where a woman, who might have been the tenth victim, was lucky enough to escape.  When Allie’s apartment gets broken into and trashed, it starts to frighten her and Danny is there to help her through it.  But what comes next, neither of them could have predicted.

This book kept me up late at night.  It was that good.  The author did an impressive job outlining characters and keeping the story interesting right down to an ending that even I couldn’t figure out.  This is my favorite of the Louisiana Lawmen series.