Review: What the Moon Saw by D.L. Koontz 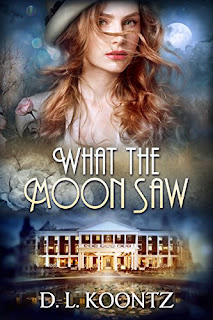 When newlywed FBI agent and brilliant linguist Libby Shaw is warned that her death is imminent, she’ll do anything she can to survive–even take mysterious advice to submerge in mineral water of Bedford Springs during a full moon. Libby finds herself thrust back in time to 1926, where danger and intrigue surround her. As Libby tries to adapt to her new life, she finds herself oddly drawn to the town sheriff who seems to know her far better than she knows herself. Yet he seems eerily familiar and as pieces of a past start surfacing in dreams and visions, Libby seeks out the handsome sheriff for answers, only to find more questions.

As Libby learns someone is following her to change history, she must join forces with the sheriff to uncover the mystery of their past. Will they be thwarted by the master criminal who's determined to destroy them both or will they be able to build a life together after lifetimes of being pulled apart by nefarious forces?

What would you do if someone told you that you only had two weeks to live?

FBI Agent Libby Shaw’s new boyfriend just dropped this bomb on her.  He told her he has traveled to the future and knows when and where certain events will happen, and her death is one of them.  When Libby’s inoperable brain tumor is confirmed by a doctor, Libby takes Andrew’s advice and submerges herself in the medicinal waters of Bedford Springs.  When Libby emerges from the water, she has been transported from the year 2016 to 1926.

While Libby is adjusting to her new life, she realizes her help is needed there more than she knew.  But not everything is as it seems in this new life, especially when it comes to the town’s Sheriff, Brogan Harrow.  Libby can’t shake the feeling that she knows him from somewhere.  Could Libby have been transported to 1926 for a particular reason?

Saying this book is highly addictive is an understatement.  Once I started reading it, I couldn’t stop.  I needed to know what happened next.  And the ending is one that I didn’t see coming.  The author did a fantastic job weaving a story that is entertaining and unpredictable. I have read some time travel books and can only say most were pretty good.  But this one blew me away.

My favorite quote in this book really sums it up:
“Love is space and time measured by hearts.”