Review: In with the Tide (Cape Cod Shore Book 1) by Charlee James 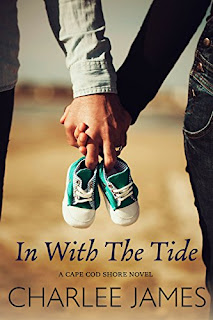 Lindsey Hunter never imagined she’d be returning to her Cape Cod home pregnant and divorced, but she’s determined to build a new life for her and her unborn baby. When car trouble leaves her stranded on the side of the road, ex-Marine Damien Trent rides to the rescue on his motorbike. Once upon a time, they’d been friends and briefly, they'd been something more...until he enlisted and left her behind. As Lindsey and Damien reconnect, the attraction is still as strong as ever. But Lindsey’s knows Damien's not the staying kind.

Damien would rather do anything than come home to deal with his father’s estate. After years of abuse, he was more than ready to leave town the moment he graduated. With Lindsey back in his life, everything is complicated. He’s used to being a lone wolf - until Lindsey and her newborn baby give him a glimpse of the kind of family and future he’s always dreamed of. Can he be brave enough to reach out and grab it?
My Review:

The most special treasures are washed in with the tide.

Years ago, Lindsey Hunter and Damian Trent shared a first kiss.  Afterwards Damian pulled away and Lindsey was left wondering why.

Lindsey was eight months pregnant and returning to her hometown of Chatham after her marriage ended.  She was looking forward to starting her new life in the cute little beach cottage she had bought.  She was headed there when her car broke down on the side of the road in a secluded area.

Damian was headed back home for his father’s funeral when he came across Lindsey with her broke down car on the side of the road.  He couldn’t just leave her there.  He had to help her even though he hadn’t planned on seeing her while he was in town.  He just wanted to get his father’s house cleaned out and sold and then he would disappear again.  But there was a glitch in his plans when he found out there were no vacancies in the hotels and Lindsey offered him her extra bedroom.  Being that close to the girl who stole his heart all those years ago was going to be a challenge for Damian.

This was a wonderfully written book with lots of elements.  For starters, there is Lindsey and Damian’s romance and their struggles learning to trust each other.  Sweet baby Maris was born early and made Damian want to settle down which totally confused him.  And then, there is a life changing discovery that Lindsey finds while going through paperwork at Damian’s father’s house.  This discovery can either help Damian settle down or send him running for good.  I really enjoyed this book and would recommend it to anyone who loves a good romance.
Posted by Janine at 4:58 PM