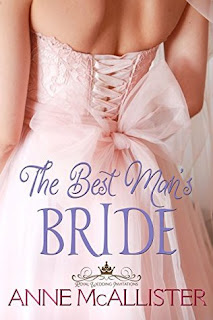 Rock star Jack Masterson is every woman’s sexy, heartthrob fantasy. He can have any woman he desires—except the one woman he wants — Celina Harris, the one who got away. Two years ago, focused on his career to the exclusion of all else, he let her slip through his fingers, but now there’s a royal wedding coming up, and both Jack and Celie will be there.

It’s taken two long, lonely years, but Celina is finally putting the pieces of her life back together. Now appointment secretary to San Michele’s Serene Dowager Margaret she spends her days assuaging royal egos, and ensuring that all runs smoothly. Each night she returns home to solitary peace after the heart ache of her tumultuous relationship with Jack.

Thrown together by the royal wedding arrangements, Celie knows the key to survival is to resist Jack’s careless charm. But Jack isn’t the man he once was, and seeing Celie awakens all his former desire. Can Celie resist the former love of her life, or will he break her heart all over again?

Rock star Jack Masterson hasn’t seen or heard from his ex-wife, Celina, in over two years and is surprised to find out she is attending his best friend’s wedding.   But, Jack shouldn’t have been too surprised as Celina was also friends with Prince Jonas when they were in college.  The biggest surprise is that Jonas kept it a secret that Celina was working as an assistant to San Michele’s Serene Dowager Margaret.   Now if Jack can only convince Celina that he still loves her and wants her back, he will be a happy man.

Celina left Jack after walking in his hotel room and finding a girl in his bed.  She didn’t stick around to listen to Jack’s excuses.  She left, never looking back and filed for divorce as soon as she could.  Celina is finally content with her life and doesn’t need a man in it.  She gets the shock of her life when she sees Jack has arrived for the wedding.

Celina tries her best avoid Jack and not think about him.  When Jack insists they spend time together it is hard for Celina to not remember the reasons they fell in love.  And, the reason she left him.  But Jack never got to tell his side of the story and hearing the truth just might change everything for Celina.

Jack and Celina never got to talk about what happened that night in that Barcelona hotel room.  Celina just filed for divorce and Jack agreed to it.  So I enjoyed when Celina finally found out the truth and was able to put it behind them.  Their reunion was a bit tense at first, but I really liked seeing how they came to terms about the past and moved on to the future.  The story was easy to follow and some areas surprised me.  It was the perfect ending for this series.