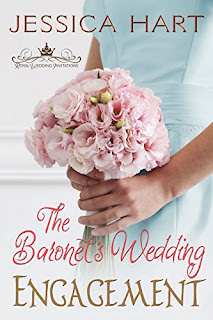 When his sister Hope announces that she is going to marry a prince, Max is taken aback to discover that the royal wedding will take place not in stylish San Michele, but at their run-down family home, Hasebury Hall. Now Max has to fix up the manor, let royal and security officials have the run of the place… and find a suitable woman to placate a Crown Princess with an obsession over protocol.

Chef Flora Deare, Hope’s friend, is in charge of catering the royal wedding and has quickly taken over Max’s kitchen – not to mention the rest of his life. As a bridesmaid, Flora will be going to the official announcement of the royal engagement in San Michele too. Max is single, she’s single: why don’t they go together and keep the Crown Princess off Hope’s back?

Max has too much Mr. Rochester about him for Flora’s tastes and she’ll be returning to London very soon to reboot her career. Still, what harm can a little pretense do if all it involves is a glamorous trip to San Michele and smiling together at the wedding itself? Apparently, a lot… Soon, it’s hard to remember what’s real and what’s not.

In the second installment of the Royal Wedding Invitations series, Hope is getting ready for her wedding and she has decided to have it at her family home, Hasebury Hall, instead of the palace in San Michele.  This puts her brother Max on edge.  He has a lot to do to get the manor worthy of a royal wedding.

Hope’s friend, Flora Deare, is doing the catering and she needs to use a big kitchen to practice in.  So, Hope gave Flora permission to use the kitchen at the manor, even if it does annoy her newly single brother, Max.  When Flora was younger, she used to have a crush on Max.  The more time she spends with him now, that crush seems to be making a return.

When Max finds out the Crown Princess is having fits about the seating arrangements because he doesn’t have a date for the royal engagement announcement in San Michele, he decides to ask Flora to be his date.  They both have to be there anyway.  Why not pretend to be a couple?  But will they be able to remember this is only to appease the Crown Princess or will they realize they just might be a perfect couple after all?

I am really enjoying this series so far.  The author did a good job writing this book and keeping my attention from start to finish.