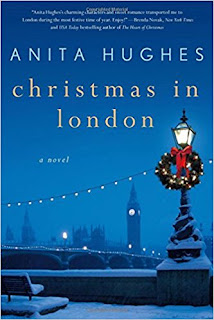 Set during London's most festive time of year and filled with delicious food Anita Hughes' Christmas in London is about love and friendship, and the season's most important lesson: learning how to ask for and give forgiveness.

It’s a week before Christmas and Louisa Graham is working twelve hour shifts at a bakery on Manhattan's Lower East Side. When a young cooking show assistant comes in from the rain and begs to buy all the cinnamon rolls on her tray, she doesn’t know what to do. Louisa is just the baker, and they aren't hers to sell. But the show burned the rolls they were supposed to film that day; so she agrees.

The next morning, Louisa finds out that her cinnamon rolls were a hit, but the star of the show was allergic, and the whole crew is supposed to leave for London that afternoon. They want Louisa to step in for their annual Christmas Eve Dinner TV special at Claridge's. It’s a great opportunity, and Digby Bunting, Louisa’s famous baking idol, will be there. Even if he does seem more interested in her than her food.

And then there’s Kate, the show's beautiful producer. On their first day in London she runs into the skinny boy she jilted at St. Andrew's in Scotland ten years ago. Now he’s a handsome, brilliant mathematician, and newly divorced. Their familiar spark is still there, but so is the scar of how they left things. Kate and Louisa are busy preparing for the show, but old and new flames are complicating their work.


Christmas in London is a memorable story about Louisa, a pastry chef from New York City, who is asked to fill in for a celebrity chef on a television cooking show being filmed in London.  Louisa's dream is to open her own restaurant and knows the publicity she gets from being on the show will help the bakery she currently works at and her new restaurant when she opens it.  So, she reluctantly agrees to go to London to film the show.

While in London, Louisa meets other well knows chefs including one who she idolizes, Digby Bunting.  But in the end, he isn't what she expected.  Noah, who is in charge of Louisa during the filming, tries to warn Louisa about Digby's reputation with women, but Louisa doesn't listen and finds herself in a sticky situation.  Noah is starting to have feelings for Louisa and just wants to keep her safe.  They both believe there isn't room in their lives for love.  But, they soon realize they were headed towards love since the day they met.

In this book, there is also the story of Kate, the show producer, and her college love Trevor.  They haven't seen each other since college after a misunderstanding that caused them to split up.  It was nice to learn how they reconciled.

As the story plays out, it is easy to visualize the sights and sounds of London and imagine eating the incredible food.  This book is a wonderful holiday tale not to be missed.

Thank you to  St. Martin's Press and NetGalley for the advanced copy of this book to review.