Christmas in Paris: A Novel by Anita Hughes - Review 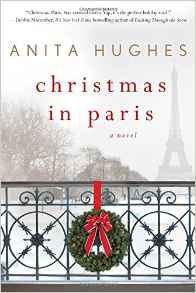 
Anita Hughes's Christmas in Paris is a moving and heartwarming story about love, trust, and self-discovery. Set during the most magical week of the year, the glorious foods and fashions of the most romantic city in the world are sure to take your breath away.

Isabel Lawson is standing on the balcony of her suite at the Hotel de Crillon as she gazes at the twinkling lights of the Champs-Élysées and wonders if she’s made a terrible mistake. She was supposed to be visiting the Christmas tree in the Place de la Concorde, and eating escargots and macaroons with her new husband on their honeymoon. But a week before the wedding, she called it off. Isabel is an ambitious Philadelphia finance woman, and Neil suddenly decided to take over his grandparents' farm. Isabel wasn't ready to trade her briefcase for a pair of rubber boots and a saddle.

When Neil suggested she use their honeymoon tickets for herself, she thought it would give her a chance to clear her head. That is until she locks herself out on the balcony in the middle of winter. Thankfully her neighbor Alec, a French children’s illustrator, comes to her rescue. He too is nursing a broken heart at the Crillon for the holidays. With a new friend by her side, Isabel is determined to use her time in the "city of lights" wisely. After a chance encounter with a fortune teller, and a close call with a taxi, she starts to question everything she thought was important.


A magical tale that will remind you why love is the greatest feeling of all time.

Isabel called off her wedding to Neil just four days before it was to happen.  They couldn’t seem to agree on anything.  She finally realized they aren’t as compatible as she thought.  Since the honeymoon to Paris was already paid for, she decided to go alone.

While admiring the bright lights of Champs-Elysees from her hotel balcony, Isabel gets locked out of her room.  She didn’t have her phone with her to call for help so she did the only thing she could think of.  She took off her Ferragamo heels and tossed them towards the door of the room next to her to get the occupant’s attention to help her.  Isabel had no idea the occupant would become a cherished friend during her stay in Paris.

Alec was supposed to be getting married too, but his fiancé had just run off to Australia with a cricket player.  He was content staying in his room working on the illustrations for his children’s books until he met Isabel who got him out to have some fun.  Little did either of them know this was just the beginning of a romance that neither of them saw coming.

When Isabel finds a fortune teller on the street, she is told several things that will happen to her.  She starts to believe the fortune teller after two predictions come true, she will receive a special inexpensive gift and come close to being killed.  So Isabel sets out to make the other part of the fortune come true.  She was told she would meet and marry a French aristocrat.  This sets Isabel off on a hunt for her new husband.  But is this new love the right man for Isabel?

The dialogue and descriptions in this book really brought it to life.  From the sights and sounds to the fashions and food, not a single detail was missed.  The story was visually stimulating.  As always when I read a book by Anita Hughes, I am drawn into from the start and don’t want it to end.