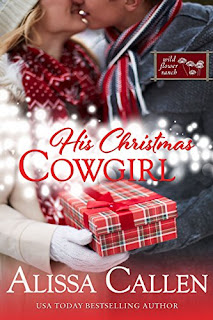 Headstrong cowgirl Peta Dixon has put her life on hold this Christmas to prove she can run her ranch as well as any man. There isn't anything she can't ride, fix, or stare down, and the only things to scare her are long hemlines and sky-high heels.

Self-made rancher Garrett Ross normally doesn't take orders - he gives them. When asked to step in and act as a temporary foreman on a Montana ranch over the holidays, he can't refuse.

But when Garrett meets the beautiful and stubborn ranch owner, he realizes he's signed on for a whole lot of trouble. Cynical and jaded, he has no time for feelings. And when Peta meets the man she's to share her life with until Christmas, she discovers she no longer wants to be the person others expect her to be...

Will the rancher finally listen to his heart and admit he can't live without a certain straight-talking cowgirl?

Peta Dixon's life goal was to run Bluebell Falls Ranch on her own and prove to her father that she could run it as well as any man.  While she was on a European vacation with her sister, her ranch foreman, Hal, got injured and ended up in the hospital.  Hal called the one man he knew that could handle taking over his job until he was back on his feet again, Garrett Ross.

Garrett knew the ins and outs of running a ranch even though he now made his money buying and selling ranches.  But when Hal needed his help, Garrett didn't hesitate to rush to his aid.

Peta didn't have time for a relationship, but from the first moment she laid eyes on Garrett, all sorts of thoughts went through her mind.  Garrett's first impression of Peta was that she reminded him of every other materialistic woman from his past.  But her looks were very deceiving.  Once Garrett got to know Peta, he realized she was a down to earth country girl with all good intentions.  she valued her ranch, the livestock and everyone who worked for her.  Together, Garrett and Peta learn to open up and trust each other and accept whatever the future holds for them.

I could tell the author did a lot of research on this book with all of the ranch scenes, especially the cattle drive.  She did a great job integrating it with Peta and Garrett’s romance.  I also enjoyed reading about Ivy and Rhett’s wedding