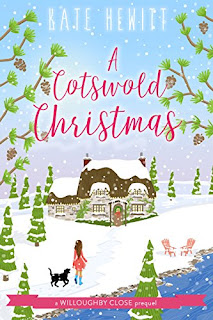 Welcome to Wychwood-on-Lea… a not-too-quaint village where frosty evenings, welcoming fires, and second chances will make this a Christmas you’ll never forget.

Anna Vere has escaped to the Cotswolds for Christmas to try to heal from her broken engagement and, far worse, her broken dreams. When her reserved room at a bed & breakfast is flooded, she takes up the offer of camping out in Willoughby Close, the converted stables of the nearby manor house… and is taken under the wing of sexy local carpenter Colin Heath.

What starts out as merely helping a neighbor in need turns into far more as Colin and Anna share a surprisingly intense and emotional connection, weaving their own Christmas magic as they spend the holiday together. But Anna has a secret she’s scared to reveal, something that could destroy the fragile bond they’ve just created, and Colin knows she’s only in England for a short time. Can these two sudden soul mates risk their hearts for a love that has yet to be tried and tested?

Get swept away by this poignant and heartwarming story, set in beautiful Wychwood-on-Lea, in the English Cotswolds. And look forward to four more books set in Willoughby Close, where everyday miracles and happily-ever-afters are guaranteed.

Anna Vere needed to be alone this Christmas so she left New York and headed to England where booked a room at a B&B in the Cotswolds.   When Anna arrives at the B&B, she is informed there has been a flood and she wouldn't be able to stay.  Being so close to Christmas, there were no vacancies anywhere close by either.  But the innkeeper has another idea.  Anna could stay with her cousin, Colin Heath, in one of the cottages he was renovating.  The next thing Anna knew, she was being kicked out of there too.  So Colin offered Anna the guest room in his house.  Anna's Christmas getaway was not going as planned.

Colin was known by his sisters as someone who always took on projects to but never finished them.  His friends accused him of being the dreaded serial monogamist.  He doesn't don't do flings.  But with Anna staying with him, something in Colin changed.  He wanted Anna and he knew she wanted him too.  But Anna was only there for a short while and she was still getting over her last relationship.  Will the magic of Christmas cast a spell on Anna and Colin and give them the gift they both desperately deserve?

From the beautiful cover, to the story, I was glad I read this book.  At first it was hard to believe in a relationship that started out so fast when both characters had emotional scars.  But the author did a good job bringing Anna and Colin together.  So also fit a lot of details into this short book.  It is a sweet and inspiring story.
I voluntarily reviewed an Advance Reader Copy of this book.