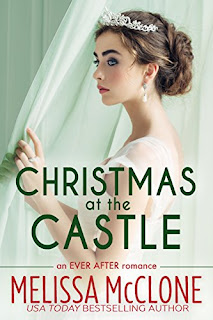 A royal wedding. A meddlesome mother. An unexpected union.

A European getaway during the Christmas holiday is exactly what veterinarian Katrina “Kat” Parsons needs. She can’t wait to be a bridesmaid in her childhood friend’s royal wedding, but she hopes to steer clear of the bride’s arrogant older brother.

Crown Prince Guillaume wants his younger sister’s wedding day to be perfect, but he’s suspicious of Kat. He and his mother on are on high alert, afraid Kat is not just there for the wedding, but also to find a prince of her own.

But when Kat’s kindness and generosity prove them wrong, the prince realizes there’s more to her than he ever imagined. Can he trust his heart or will he lose the one woman he can’t live without?

The Ever After series
Book 1: The Honeymoon Prize
Book 2: The Cinderella Princess
Book 3: Christmas at the Castle

Once upon a time there was a beautiful veterinarian who would travel to a faraway land to be in her best friend's wedding.  While there, she will kiss a frog (aka Prince Annoying) and make him into her very own Prince Charming.A royal wedding.

A meddlesome mother.  And an unexpected union.

Katrina "Kat" and Princess Sophie have been best friends since they met as children and met at camp.  So when Sophie asks Kat to be in her wedding, she doesn't think twice even if it means traveling at Christmas time half way around the globe to Alistonia to be there.

Crown Prince Guillaume "Gill" did not expect Kat to be there for Sophie's wedding.  Sophie kept Kat's participation in the wedding a secret as she knew Gill would manage to intercept with her plans if he knew.  Gill and his mother, the queen, are suspicious of Kat and keep a close eye on her.  The queen thinks Kat is out to snag a royal.  And Gill is her target.  But as Gill gets to know who Kat really is, he starts to soften a bit around her.  Will it be enough for Gill realize Kat really is a good person and possibly the right woman for him?

Christmas is a time of magic and miracles and what you least expect can happen in the blink of an eye.

From the beginning of the book you get the feel for Kat and how hard working she is when she is awakened by a co-worker after falling asleep in the barn.  She doesn't take time off for much of anything, especially dating.  She is down to earth and a good girl who will do anything for animals and her friends.  I enjoyed the glitz and glamour, along with the drama, of the wedding planning and seeing Kat and Gill become friends and eventually have their first life changing kiss.  I had a laugh when Jamie, Sophie's future brother-in-law, was making passes at Kat and Gill would start to get jealous.  The scene at the museum and the way Kat handled them both was priceless.  The puppy part of the story was a sweet addition too.  I really enjoyed the festive feel of this book.  I'm putting it down as my favorite Christmas book so far this year.  It's a story that I could easily visualize while reading it.  It would make a perfect Hallmark TV movie one day too if the Hallmark people ever got word of it.
I voluntarily reviewed an Advance Reader Copy of this book.