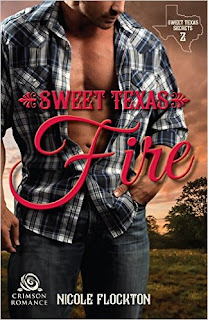 Gage Cooper has always wanted the family cabin. Not only for the oil on the property, but as a way to prove to his father that Gage's past doesn't define his future. When his dad wills the land to stranger Charlotte Wilkinson and all Gage gets is a mysterious key, he's determined to do anything to get his rightful inheritance back.

Charlotte Wilkinson never expected to inherit a piece of property in Sweet Ridge, Texas - the Aussie businesswoman is focused on building an environmental analyst career here in the States. But the moment arrogant oil-man Gage Cooper walks into her office accusing her of seducing his father, all plans for selling the property to him fly out the window.

Then fate threatens to send her back to Australia and the dueling duo are forced to accept a fake marriage to keep their dreams alive. But as they discover common ground and a surprising chemistry together, suddenly Gage must decide what's worth more: the land he's always coveted or a future with Charlotte.


The key to everything is happiness

When Jack Cooper passed away, his three sons were baffled as to why they didn’t inherit they expected, only a small memento and a strange message.  Gage Cooper expected to inherit the oil rich land his father told him would be his, but to his surprise, it was left to a woman he barely knew and he ended up with a key that he had no idea where it went.

Charlotte Wilkinson only met Jack Cooper a few times when she was passing through Sweet Ridge Texas, but they hit it off pretty good and became friends.  She was shocked to find out he left her some land and the house that was on it.  What Charlotte didn’t expect was for Jack’s son to be the stubborn oilman she has been doing business with.

As an Australian citizen, Charlotte’s work visa is about to run out.  She will do anything to stay in Texas and working for the company she loves.  Gage just wants his land and comes up with an idea that will help them both.  After a year, Charlotte can sell the land to Gage and when they divorce, she will have her green card.  It’s a win-win for them both.  Or is it?

This was a good book.  The tension between Gage and Charlotte made the story fun.  But when they finally fell in love, it was even better.  The story was easy to visualize and the characters were interesting.  Finding out where the key that Gage inherited fit was another story on its own.   I also have to mention a cute kitten names Oil Slick was in the story that made me smile too.
Posted by Janine at 8:10 AM