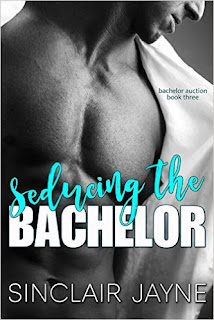 Single mom and veterinary student Talon Reese thinks she is volunteering her time, not her heart or her body, for Marietta Montana’s second annual Bachelor Auction. But when Bachelor number 3 hits the stage, igniting every hormone she forgot she possessed, she’s questioning her vow of no more men. With a man this drool worthy, some fun doesn’t have to be off the table, even if she's not looking for a relationship.

Special Forces sniper Colt Ewing blew out of Marietta on graduation day and never looked back, until his former football coach asked for his help. Standing on the auction block is a tough mission for Colt until he meets his winning bidder, a woman who’s as warm and friendly as he is aloof and silent. All night her mouth has been creating sexual fantasies, so when she opens it to boldly proposition him, there’s no way in hell he’s going to say no.

But as Colt and Talon burn up the sheets, he begins to forget why he hates this town, and Talon wonders if she can learn to trust enough to fall in love. But will that be enough to convince him to stay?

Love often happens when you least expect it.

Colt Ewing felt like an auction steer.  But he would do anything for Coach D, even stand in front of a room full of women being sold to the highest bidder.  As long as it meant Marietta would be able to get a helipad at the hospital, he is willing to do it.  Colt had no idea he would get wrangled into a bachelor auction when he came home to deal with his uncle's ranch after his death.

Talon Reese was just helping out at Gray's Saloon the night of the bachelor auction.  She just wanted to finish her shift and head home with her son and do some studying.  Talon was blindsided by her friends when she found out they bid on bachelor number 3 as a gift for her.  She doesn't have time for this.  She is focusing in her veterinary degree and raising her adopted son on her own.  There is no room for dating even if it is for just one weekend.

Talon's willpower goes out the window when it comes to Colt.  He has awakened something in her that she thought was long gone.  Talon has also done a number on Colt.  Will what they have together in the short time be enough for an everlasting relationship?

This steamy romance that was hard to put down.  Talon and Colt had great chemistry together.  The author fit a lot of details in this short book so you really understood how the characters felt and where they were coming from.