Review: Taken by the Raider by Dani Collins 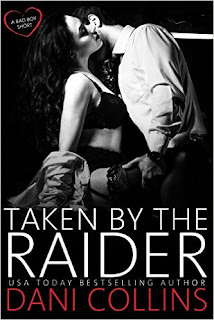 The first time Aubrey Hargrave was “acquired” by corporate raider Griffen Woodlock, she was unable to resist his potent sexuality. She made the fatal mistake of mixing business with pleasure, but had to end their passionate affair to save her father’s reputation—and her heart.

At 20, Griffen pushed his abusive father out of his CEO position to take the chair himself. Aside from indulging his passion for beautiful women, Griffen hasn’t made an emotional decision since. When Aubrey cuts short their white-hot affair, he tells himself she can easily be replaced. Except she can’t.

Discovering Aubrey’s family secret gives Griffen the power to force a second take-over, but he intends to seize more than her business. He wants her.

How far will a ruthless businessman go to be with the woman he desires?

Aubrey Hargrave and Griffen Woodlock had a professional and personal relationship until Aubrey decided to leave him and go to work for Cutting Edge.  Griffen will do anything to get Aubrey back, even taking over the company Aubrey has invested a lot of time into.  Once he has her back, he will have his way with her once again.

When Griffen discovers the family secret that Aubrey has been hiding, he has more leverage to get her to do as he wishes.  How far will it go before Aubrey decides enough is enough and walks out for good?  Will Griffen be able to get Aubrey back this time?

There was a lot of tension between Aubrey and Griffen and through a lot of the book I got where I didn't like Griffen.  But he redeemed himself in the end when he told Aubrey his family secrets and why he was so persistent in all areas of his life.  Great writing and a lot of steamy intimate scenes kept this book interesting.